Liverpool Football Club and Standard Chartered Bank are pleased to announce a four-year extension to their main sponsor agreement, taking the Bank’s partnership with the Club through to the end of the 2022/23 season. The Bank first signed up as the Club’s main sponsor in July 2010, and the agreement was extended in 2013 and again in 2015. Financial terms of the agreement remain confidential. Liverpool FC has a large number of fans across Standard Chartered’s core markets in Asia, Africa and the Middle East and the sponsorship provides the Bank with an opportunity to accelerate visibility of its brand, improving recognition across key markets around the world.

Additionally, over the last eight years Standard Chartered and Liverpool FC have used their partnership to support a number of the Bank’s sustainability and community investment programmes. The annual ‘Perfect Match’ game – where LFC players swap the Standard Chartered logo on their shirts for the Seeing is Believing logo – has raised more than USD480,000 to tackle avoidable blindness.  Billy Hogan, Managing Director and Chief Commercial Officer, Liverpool Football Club said: “As a Club we’re very proud to have Standard Chartered renew their relationship for another four years. Our connection runs deep, it means more than just sponsorship, from the outset it has been about working together with the Club and our communities and supporters around the world. “Importantly, it also means we are able to support our ambitions on the pitch and compete with the best in the world. We have enjoyed many highlights of this relationship so far and I look forward to many more.”

Bill Winters, Group Chief Executive, Standard Chartered, said: “Liverpool FC is one of the world’s best-known football clubs and we are proud to be associated with them. It is a fantastic club that shares many of our values and is hugely popular across our global footprint. Our partnership has provided valuable support to the charitable initiatives close to our hearts and has helped us to further engage with our clients and staff as well as with LFC fans. We are excited to be able to continue this partnership, and look forward to building on our successful relationship.”

Nigeria is to be represented at the regional circuit of the ongoing Standard Chartered Bank’s Road to Anfield five-a-side competition by Super Seven FC. 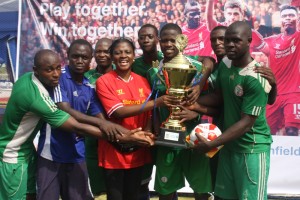 Super Seven bagged the ticket to the regional final in Accra, Ghana after defeating Dobber FC 6-5 in a penalty shoot-out at the Astro Turf ground in Lekki, Lagos. Neither of the two sides could end the scoreless deadlock at regulation time.  Also to join Nigeria and host Ghana at the Accra soccer fiesta is The Ghana. The three are to battle for the West African ticket to Anfield in the UK where the winners of the East and Southern African regions will also play.
According to the Sub-Regional Head, Brands & Marketing, West Africa of Standard Chartered Bank, Diran Olojo, the ‘Standard Chartered Trophy’ is an international five-a-side football tournament organised by the bank in partnership with Liverpool FC.
“It  offers football fans a once in a life time, money can’t buy, opportunity of playing at an English Premier League football pitch as well as been coached by Liverpool FC’s Manager, Brenda Rodgers,” observed Olojo at the trophy presentation at the weekend.
Standard Chartered’s global footprints will compete for the ultimate trophy on May 7 and 8, 2015. The winners of the ‘Finals’ will be crowned overall champions of the ‘Standard Chartered Trophy 2015’.
Also speaking at the end of the national final last Sunday, Country Head, Corporate Affairs, Standard Chartered Bank, Nigeria, Dayo Aderugbo, expressed her happiness at the level of performance of the players and the huge turnout of football fans.
“I am so excited with the level of performance. We have a huge turnout. 36 teams registered and contested in the championship. So, regardless of  the club you support, it’s a chance to come together and win together and  go and play in Anfield, the home of Liverpool FC,” she noted with excitement.