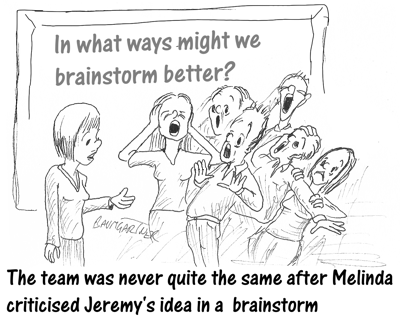 Ever since it was first invented by Alex Osborn in the 1950s or so, the fundamental rule of brainstorming, and just about every creative thinking method, has been, “Though shalt not criticise ideas.”

Mr Osborn never made it entirely clear why it is so bad to criticise ideas, though it is implied that you might hurt people’s feelings, inhibit creativity and possibly emotionally scar someone for life. Clearly then it is best to welcome all ideas with compliments, even if they are stupid, and never, ever criticise an idea. At least, that was the assumption

No one dared question this assumption for more than half a century − until 2008 when a couple of bright sparks at Berkeley University, Matthew Feinberg and Charlan Nemeth*, decided it was time to ask some questions. They conducted a study in which they put volunteers into teams and divided those teams into three three groups. One group followed traditional brainstorming rules. The second group were also told to follow brainstorming protocol with the exception that they were actively encouraged to criticise ideas. The third group was the control group. They were just told to come up with ideas any way they wanted to do.

The control group’s outcome was the least creative. Only moderately better were the traditional brainstormers. By far the most creative group was the group that had been encouraged to criticise ideas.

This surprised a lot of people, especially people involved in creative facilitation. Their fundamental rule had been proven to be, well, completely wrong. Many professional brainstorming facilitators simply denied the results rather than accept their method might be flawed.

Others tried brainstorming and other ideation methods in which we actively encourage criticism during the ideation. I certainly did. And, I found it was surprisingly effective. In my experience, results are far better than when criticism is forbidden.

I believe there are several reasons why this is so.

Brainstorm fans often worry that allowing criticism of ideas will lead to a downward spiral where everyone is negative and no new ideas are developed. In my experience, this does not happen. I believe it is because when a group of people in an organisation are trying to build ideas, they have a common goal in building a relevant idea that achieves their needs. Bring relentlessly critical will not get them to their goal. Being productively critical will.

In anticonventional thinking (ACT), an alternative to brainstorming that encourages criticism, there are three rules.

I have found these rules, together with encouragement to criticise ideas, ensures that critical discussions are meaningful and feelings are not hurt. Ironically, several people have told me after ACT sessions that criticism of ideas makes them feel freer and less constricted than when they cannot criticise ideas.

Go On, Give It a Try

If you run brainstorms and have always adhered to Mr Osborn’s rule that you must withhold criticism, I suggest you experiment with ideation that welcomes crticism and see what happens. Mr Osborn surely would not mind. After all, he was a fan of creativity and trying out new ideas.  Moreover, I believe you will be pleasantly surprised by the results.