ECOBANK Plc. Ecobank is Nigeria’s largest bank brand with over 600 branches. It is also the widest banking network in Africa with presence in 32 countries predominantly in Sub-Saharan Africa.

Ecobank Transnational Incorporated (ETI), a public limited liability company, was established as a bank holding company in 1985 under a private sector initiative spearheaded by the Federation of West African Chambers of Commerce and Industry with the support of ECOWAS. The dual objective of ETI is to build a world-class Pan-African Bank and to contribute to the economic and financial integration and development of the African continent.

The 100% acquisition of the shareholding in Oceanic Bank in 2011 has increased the asset base of Ecobank Nigeria, a subsidiary of ETI, making it one of the five largest banks in Nigeria. Today, with over 610 free-standing branches, Ecobank Nigeria is the second-largest bank in the country by branch network.

Green James Rose of Ecobank king Jaja branch in Bonny, Rivers State has won the grand prize in the Ecobank Win Big Promo that ended in December. Green James Rose, who won a Nissan SUV, emerged from amongst 1,519,340 who qualified for the grand prize. Also, Margaret Omisakin of Ile-Ife Branch is taking home a Nissan Salon car being the star prize for the fourth win big draw combined with the grand draw event. 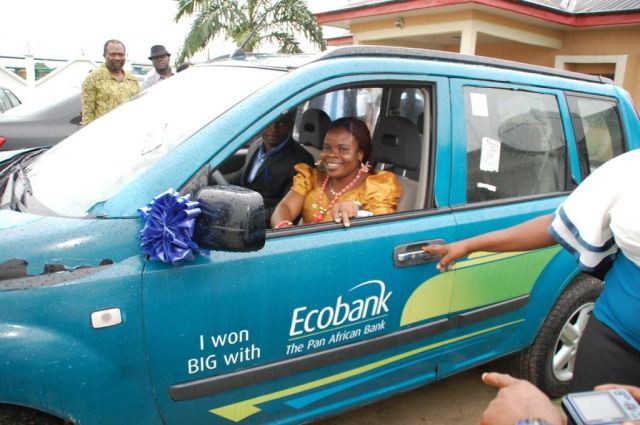 Addressing customers and guests at the draw event which held in Lagos, Funwa Akinmade, Head, Domestic Bank Products said Ecobank has kept faith with its customers by rewarding them monthly since October 2012 through the Win Big Promo. Previous draws held in Port Harcourt, Abuja and Lagos.

He emphasized that the bank had decided on the promo as its own way of encouraging people to be diligent in savings, which for him would come handy during the rainy day. In his words “It has been wonderful to hear the pleasure and happiness in customers’ voice as they are informed of their winnings!” We encouraged old and new customers to open or grow their accounts with Ecobank and be rewarded for it.”

The “Win Big with Ecobank” promo gives each customer the opportunity to own new cars at each of four monthly draws and a grand prize of a Sports Utility Vehicle (SUV) at the grand draw.

New customers who open an account with a minimum of N20,000 will be entitled to an instant gift and also qualify for the monthly draw if they maintain the deposit for a 30 day period. Existing customers who increase their balance by N20,000 qualify for the draw and multiples of N20,000 give the customer more chance of winning. To be eligible for the grand prize a customer is expected to maintain a minimum balance of N20,000 for 4 months to give a total of N80,000; multiple entries of N80,000 was permissible.