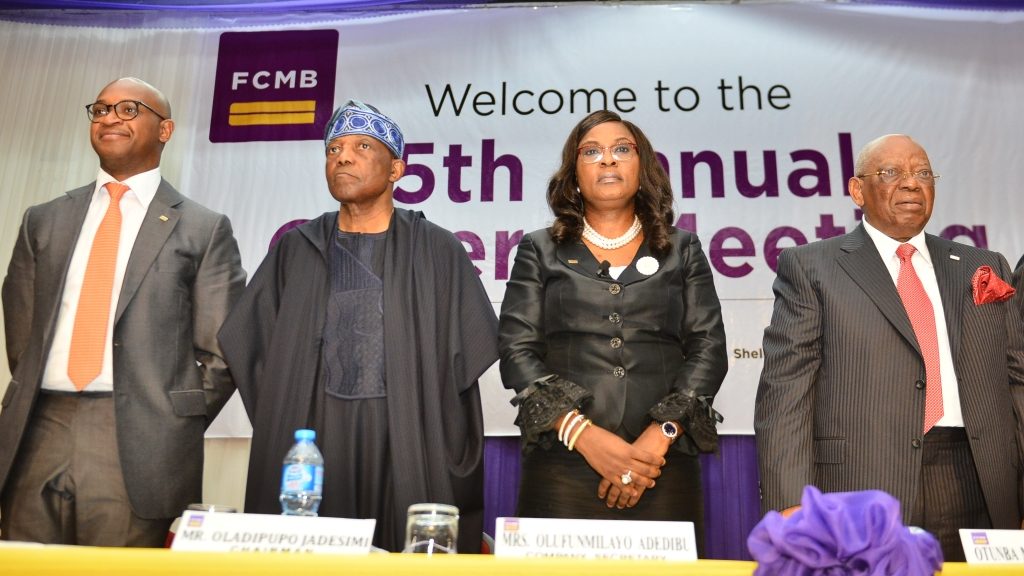 Lagos: April 27, 2018:  FCMB Group Plc is on a stronger pedestal and will continue to provide superior performance that would add significant value to stakeholders in a sustainable manner in spite of the challenging macroeconomic and regulatory environments. The financial institution added that its subsidiaries are well positioned to deliver more cutting-edge solutions that would provide the best customer experience in their respective target markets.

‘’We will continue to shore up the capital of the bank through profit retention in preparation for the growth opportunities that we expect as the economy recovers’’.

The new Chairman of the Board of FCMB Group Plc expressed gratitude to shareholders for their continuous support, adding that:

‘’Although we met with a number of challenges as a Group in 2017, I am pleased to say that we were able to surmount them, thanks to the commitment of all the personnel of our Group companies’’.

‘’In spite of the reduction in headline numbers, Group performance is an improvement over the previous year after adjusting for the significant FX (foreign exchange) revaluation income enjoyed in 2016. The key drivers of the Group’s performance include increase in income from our non-banking activities, lower impairment charges from the bank and its subsidiaries, and improved operating efficiencies through more pervasive use of technology’’.

“ We see significant growth opportunities in the Pension management industry in Nigeria as it is yet to achieve maturity and will support and facilitate strategic organic and inorganic growth initiatives that will position Legacy in the top-tier of its industry over the next few years’’.

Concerning the performance of the flagship of the holding institution, First City Monument Bank Limited, the Commercial and Retail Banking member of FCMB Group Plc, the Group Chief Executive told the meeting it:

‘’showed signs of improvement with growth in income levels (after adjusting for exceptional FX revaluation income in 2016), reduction in impairment charges and substantial growth in our UK business and consumer finance business (CDL), after a difficult 2016. Commercial and Retail Banking remains our largest group, contributing 76.2% of profits and 98.5% of total assets’’.

He, in addition stated that the Investment Banking arm:

‘’Exhibited improved performance, from a loss position in 2016 of N84.0million after tax to a profit position of N430.3million after tax in 2017, largely driven by CSL Stockbrokers Limited. Our stockbroking business remains a top-3 player in its sector and participated as the sell-side broker on the largest ever trade on the Nigeria Stock Exchange in December 2017. CSLS Stockbrokers Limited and FCMB Capital Markets Limited jointly accounted for 4.1% of profits’’.